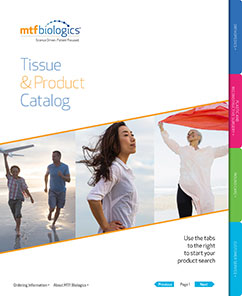 December 1, 2014 — The Musculoskeletal Transplant Foundation (MTF) announced today that Naomi Kurlowich of Columbia, SC, a tissue transplant recipient, will represent MTF for the Donate Life Float at the 2015 Tournament of Roses Parade in Pasadena, CA.

Diagnosed at birth with Down Syndrome, Naomi Kurlowich, never let it slow her down, from playing on a local softball team for children to being a physically active student at school.

Around her eighth birthday, Naomi began to experience painful dislocations of her kneecaps, also known as patellofemoral instability, while playing the sports she loves so much. The frequency and severity of the episodes increased as the ligaments supporting her patella became weaker with each dislocation.

A nasty fall right before her 15th birthday left her wheelchair-bound and her parents were advised that a more aggressive approach was needed. Their surgeon explained that Naomi's ligaments were too weak to reconstruct and suggested using donated tissue to fix the problem.

Naomi had the surgery to repair both of her knees a few months apart. She received tissue from two donors to strengthen and stabilize her knees. As her parents watched her recover, they marveled at the thought that two families had made the most selfless gift of donation, which gave their daughter a new lease on life.

"After a few weeks of physical therapy, Naomi progressed to a walker and the wheelchair was history," said Carol Kurlowich, Naomi's mother. "Two years later it still makes my heart sing to watch her run exuberantly around a ball field and up and down a basketball court."

Today, Naomi is an active 17-year-old who can walk, run and play softball, all from the generous gift of tissue donation from two donors and their families.

“We are delighted to sponsor Naomi and to support the Donate Life Float at the Tournament of Roses Parade. Her story highlights the incredible gift of tissue donation and the importance of the work done at MTF," said Martha Anderson, Executive Vice-President, Donor Services.

To see a video about Naomi and her story, go to https://www.youtube.com/watch?v=8SXAmNJ6vng